• Immersive Tour of Stadium
• Entry to the museum
• Knowledgeable guides

The perfect day out for any United fan. First comes the Stadium Tour where an experienced guide will show you around the iconic football ground that is Old Trafford, and help you appreciate the unique atmosphere of the theater of Dreams. The Museum is a must to understand the rich history of Manchester United.

What happens on the day?

Your experience will include both a stadium tour and visit to the museum featuring:

On the stadium tour, you can soak up the atmosphere for spectators with a spectacular view from high in the stands. See the Home Dressing Rooms, get up close to the Dugout from where Sir Alex once commanded proceedings and now vacated by club legend Ole Gunnar Solskjær.

Go down the Players Tunnel and feel the tension for the teams as they go out to be greeted by 76,000 fans.

Follow the early troubles to become established in the football league, the inter-war years, and the rebuilding of the ground and club after the Second World War.

The Matt Busby era followed with the building of the Busby Babes team, then the tragedy of Munich. There followed another rebuilding by Sir Matt Busby and the introduction of great stars like Dennis Law, Bobby Charlton, and of course George Best. Manchester United’s first great European Cup win in 1968 was the climax to this era.

Then through the twenty-six-year history of United’s latest legend Sir Alex Ferguson.

Learn how he created a long line of Premier League winning teams, and the introduction of such stars as Eric Cantona, Roy Keane, and Cristiano Ronaldo.

How long should I allow for this experience?

The stadium tours last approximately 1 hour 10 minutes and it is recommended you allow an additional hour to visit the museum. You are able to visit the museum at your leisure before or after the tour. Please ensure you arrive for your tour in plenty of time. If your stadium tours booked after 15.00 you will need to view the Museum prior to the Tour.

Please take your voucher with you on the day. Once you have booked a time and date for your tour you will be sent a confirmation letter. Kindly present both your voucher and letter to the ground floor reception desk on entering the Sir Alex Ferguson Stand. Tours leave promptly from level 1 inside the museum.

The experience content, equipment used and restrictions may vary according to location.

The centres contracted with us hold public liability insurance. We also hold contingency liability cover. You will not be liable for accidental damage to equipment, except where damage has been caused as a result of recklessness or wilful negligence.

A cancellation indemnity, subject to terms, is included with every voucher.

All you have to do is pay for the experience you wish to purchase and we’ll send a voucher and booking information to you or directly to the recipient, then you just need to check the info and book your experience.

Time Out – 20 Things To Do in Manchester

Things To Do in Trafford – TripAdvisor 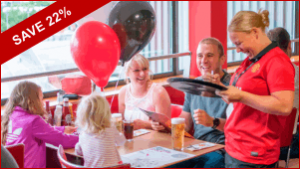 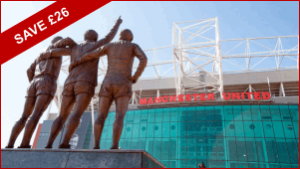 What can I say bout this tour it was amazing! Are tour guide really made it special for my children and us as adults 10/10 p.s Layton said thank you Paul for your badge you made his day and he loved his birthday surprise

Finally got the chance to make a tour of my beloved reds and what can I say... an incredible day. Our guide was extremely friendly and happy to answer my questions. Really impressive to see the stadium immaculate and empty - awe inspiring! Loved entering through the players tunnel to the sound of an excited home crowd... recording of course but still an amazing experience!

Because these cookies are strictly necessary to deliver the website, refusing them will have impact how our site functions. You always can block or delete cookies by changing your browser settings and force blocking all cookies on this website. But this will always prompt you to accept/refuse cookies when revisiting our site.

We fully respect if you want to refuse cookies but to avoid asking you again and again kindly allow us to store a cookie for that. You are free to opt out any time or opt in for other cookies to get a better experience. If you refuse cookies we will remove all set cookies in our domain.

We provide you with a list of stored cookies on your computer in our domain so you can check what we stored. Due to security reasons we are not able to show or modify cookies from other domains. You can check these in your browser security settings.

We also use different external services like Google Webfonts, Google Maps, and external Video providers. Since these providers may collect personal data like your IP address we allow you to block them here. Please be aware that this might heavily reduce the functionality and appearance of our site. Changes will take effect once you reload the page.